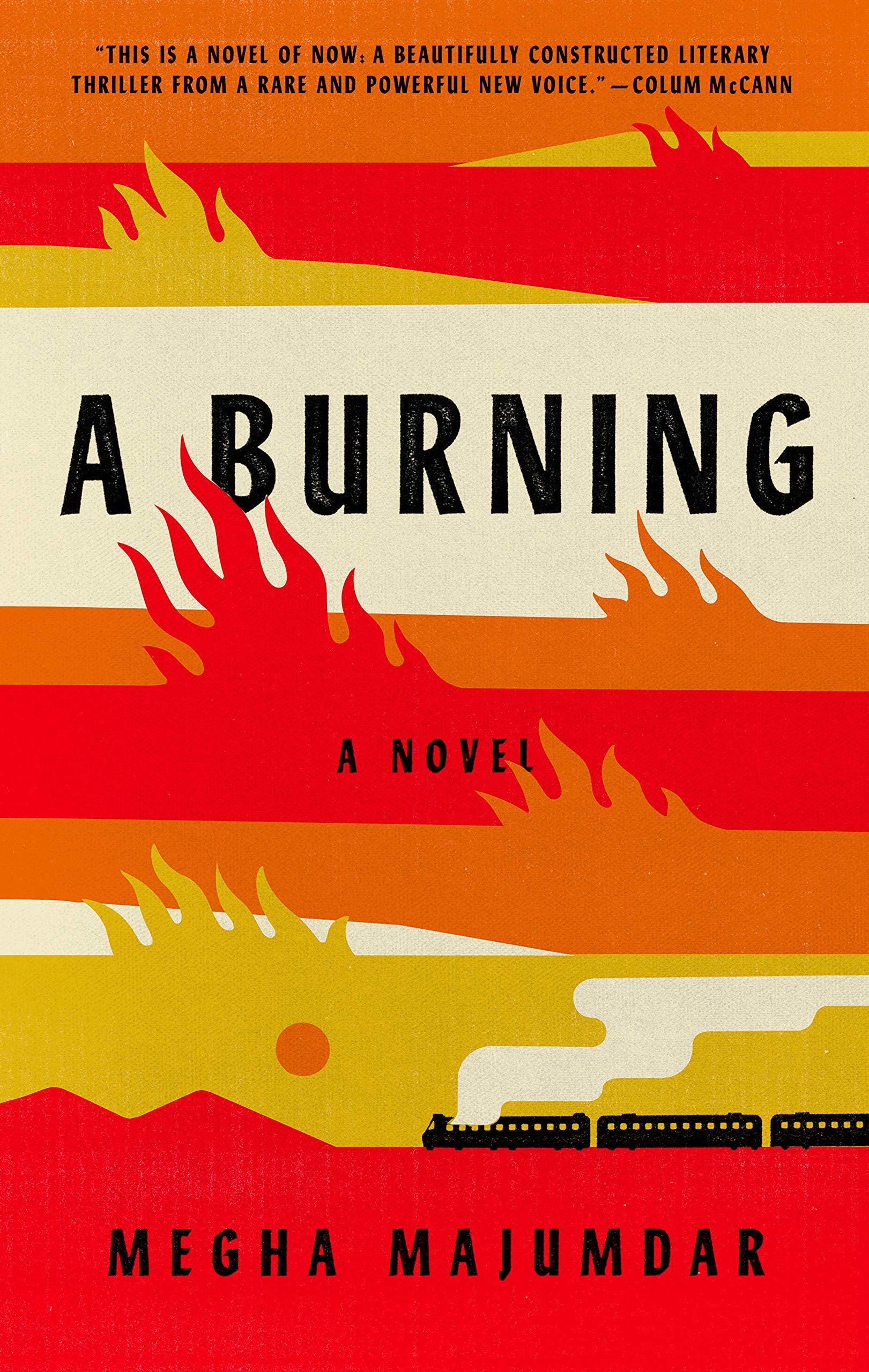 Sunday morning! Time to go to acting class. With my hips swinging like this and like that, I am walking past the guava seller.

“Eight thirty,” he is grumbling, because he is not wishing to share with me the fruits of his wristwatch. Leave him. I am abandoning my stylish walk and running like a horse to the local railway station. On the train, I am finally catching my breath and—

“Who is pushing?” one aunty is shouting. “Stop it!”

“This hijra couldn’t find a different compartment to hassle?” the peanut seller is hissing, as if I am not having ears.

Nothing is simple for a person like me, not even one hour on the train. My chest is a man’s chest, and my breasts are made of rags. So what? Find me another woman in this whole city as truly woman as me.

In the middle of this crowd a legless beggar is coming down the corridor, sitting on a wheeled plank of wood which he is rolling on everybody’s feet.

“Give me one coin,” he is whining.

People are yelling at him.

“Where will I stand, on your head?”

Now he is also shouting back—

“Let me cut off your legs, then you see how you manage!”

It is true to god making me laugh and laugh. This is why I am liking the local trains. Every local train is like a film. On the train, I am observing faces, body movements, voices, fights. This is how people like me are learning. When this train is swaying, picking up speed, wind whipping my hair, I am putting my fingertips on the ceiling, making my body straight and tall for Mr. Debnath’s acting class.

At Mr. Debnath’s house, he is resting in a chair, drinking tea from a saucer. That way the tea is cooling fast and he is not having to do phoo phoo.

I have heard of acting coaches who are taking advantage of strugglers. But Mr. Debnath is not like that. He is having morals. In his younger days he was getting a chance to direct a film himself, but the opportunity was in Bombay. So he was having to go to Bombay for six months, minimum. At that time his old mother was in a hospital. What kind of monster would abandon his mother to chase his dreams? So he was sacrificing his own goals and staying with his mother. When he was telling us this sad story, it was the only time I was seeing him cry.

Nothing is simple for a person like me, not even one hour on the train. My chest is a man’s chest, and my breasts are made of rags. So what?

Next to his feet are sitting six other students. Brijesh, who is working as an electrician; Rumeli, who is selling magic ointment for rashes; Peonji, who is working as a clerk in the insurance office; Radha, who is studying how to be a nurse; and Joyita, who is doing bookkeeping in her father’s pen refill business. Nobody is really sure what Kumar is doing because he is only laughing in answer to all questions.

We are all saving and saving, and handing over fifty rupees each class.

Today, in this living room which is our stage, we are pushing the dining table to one side, and practicing a scene in which a man is being suspicious of his wife. After some, if it can be said, lackluster performances, it is my turn. I am placing my phone on the floor to record myself for study purposes, then going to the center of the room and rolling my neck, left to right, right to left. Mr. Debnath’s deceased parents, please to pray for them, are looking at me with strict faces from photos on the wall. I am feeling hot, even though the fan is running on maximum speed.

Time for my artistic performance. This time my partner is Brijesh, the electrician. According to the script that Mr. Debnath is giving us, Brijesh, now the suspicious husband, is having to hold my shoulders forcefully, angrily. But he is holding my shoulders too lightly. I am being forced to leave my character.

“Not like that!” I am saying, “If you are holding me like a petal, how will I have the strong feeling? You have to give it to me, the anger, the frustration! Come on!”

Mr. Debnath is approving of this. If you are not feeling it, he is always saying, how will your audience be feeling it? So I am hitting Brijesh’s shoulder a little, making him a bit angry, showing him that he can be a little more manly with me. He is mumbling something, so I am saying, “What? Say it loudly.”

After a long time Brijesh is finally saying, “Uff! Don’t make me say it, Lovely. I can’t do this marriage scene with a half-man.”

At this time the clock is gonging eleven times, making us all silent. My cheeks are getting hot. Oh I am used to this—on the road, on the train, at the shops. But in my acting class? With Brijesh?

So I am just throwing away his insult. It is garbage.

“That’s right,” Mr. Debnath is saying. “If you are serious about films, you have to be fully in your role—”

He is giving Brijesh a real lecture. When he is pausing, you can even hear the ticking of the big clock on the wall.

Finally Brijesh is joining his hands to beg forgiveness from me, per Mr. Debnath’s suggestion, and I am having a few tears in my eyes also. Rumeli is blowing her nose into her dupatta. Mr. Debnath is clapping his hands and saying, “Channel this emotion into your scene!”

The moment is full of tension. The other students are putting their mobile phones away when I am roaring: “You have the audacity to hit a mother!”

This character’s rage, I am feeling it in my chest. This living room, with chair and table pushed to the corner, with cabinet full of dusty teddies, is nothing less than a stage in Bombay. The tubelight is as bright as a spotlight shining on me. Outside, a pillow-filler is walking by, twanging his cotton-sorting instrument like a harp. Only windows, with thin curtains, are separating me from the nobodies on the street.

Then, holding the emotion but lowering my voice, I am delivering the next line: “Have you not fallen from your mother’s womb?”

Brijesh: “Mother, hah, as if you have that dignity! You think I don’t know about him?”

Me: “I swear it’s not what you are thinking. Let me explain. Oh, please give me one chance to explain.”

Me: “I was never wanting to talk about my past, but you are forcing me. So now I have to tell you my secret. It is not me who has been with that man. It is my twin sister.”

What dialogue! The scene ends.

My palms are chilled and sweating. But my heart is light like a kite. There is thundering silence in the room. Even the maid is watching from the doorway, both broom and dustpan in her hand. Her jaw is falling open. Seeing her, I am feeling like smiling. I am finally coming out of the scene and back into the room.

“This is how you do it!” he is whispering. His eyes are big. He is trying to put on his sandals and stand up from the chair, but one sandal is sliding away every time he is putting his foot on it. Never mind, he is looking very serious.

“My students, see how she used her voice?” he is saying. “See how she was feeling it, and that feeling was being transferred to you?” Spit is flying from his mouth, showering the heads of his students.

Radha, who is sitting below him, is tearing a corner of the newspaper on the floor. Then she is wiping her hair with it.

Almost one year ago I was coming to Mr. Debnath’s house for the first time. He was asking to take my interview in the street. Because—he was saying, this was his explanation—the house was being painted, so there was nowhere to sit.

Rubbish. Where were the painters, the rags, the buckets, the ladders?

I was knowing the truth. The truth was that Mrs. Debnath was not wanting a hijra in the house.

So I was standing in the street, making sure a passing rickshaw was not hitting my behind. Mr. Debnath was saying, “Why you are so bent on acting? It’s too hard!”

My kohl was smearing and my lipstick was gone on some cup of tea. My armpits were stinking, my black hair was absorbing all the heat of the day and giving me a headache. But this was the one question I was always able to answer.

Today, I am standing up and joining my hands. I am bowing. What else to do when there is so much clapping? They are clapping and clapping, my fans. My bookkeeper fan, my ointment-seller fan, my insurance clerk fan. Even when I am waving my hand, smiling too broadly, saying, “Stop it!” they are going on clapping.

Until I was thirteen-fourteen years old, I was living with my parents, who were both working in the local post office, and my grandparents, two uncles, their wives and children, all of us stuffed in a four-room apartment with a small balcony where we were sprinkling puffed rice for sparrows to eat. We were neither rich, neither poor. Once a month we were going to the movie theater after eating rice and egg at home. The popcorn counter was not existing for people like us.

In the outside world, I was wearing boy’s shorts and a boy’s haircut, and playing cricket. But secretly, at home, I was trying lipstick. I was wearing my mother’s saris once, twice, thrice. The fourth time my uncles were persuading my father to kick me out of the house. “What dignity will we have with this unnatural boy in the household?” they were shouting. “Our children are normal, think about them!”

My cousins were hiding in a bedroom, peeping out at me with big eyes.

My mother was fighting to keep me at home. She was saying I could be going to a special school! I could be seeing a doctor! But how long can a mother be fighting against the laws of society? So I was leaving.

In my heart I am knowing that my grieving mother must have been looking for me for years. Maybe she is still searching for me. I am not thinking about her any more.

When I was first finding my way to the hijra house, I was learning singing and dancing, the art of charming strangers and persuading them. In classes run by an NGO, I was continuing my studies of Bengali and arithmetic, until their funding ended. So I was never learning a lot from books. When I was a child, I was being taught that school was the most important thing in the world—my exams and my marks would make me successful! These days, I am seeing that’s not true. Was Gandhiji spending his time sitting on top of a book? Was Rakhi, the greatest film star in history, spending her time saying no, please, cannot make films due to I am having to study a book? No. Me, I am learning from life.

Excerpted from A Burning by Megha Majumdar. Reprinted with permission of the publisher, Knopf, an imprint of Penguin Random House.